Why do we do it? Because life's too short.

Yesterday (15th May) was a very special day. It was my youngest daughter's 7th birthday. We celebrated with a visit to Eden and, once again, thanked our lucky stars for the life we have been given. It would have been special anyway, even if it wasn't for the promise that Joanne and I made to ourselves at around the time Charlie was born.

Charlie popped out in Bristol. It was just as her big sister Maggie was finishing treatment for acute myeloid leukaemia. I won't go into that side of things too much other than to say it was a genuinely terrifying time for all of us. Jo left in an ambulance threee months pregnant and didn't make it home until Charlie was a month old.
I carried on working in Devon, commuting most evenings to do my share of the hospital night shift whilst Jo moved in to CLIC House in Cotham to get some rest. As the time got nearer to Charlie's due date we all moved in to the home from home provided for us by CLIC. Eventually, thanks to the miracles that the team at Bristol Children's Hospital were able to perform on Maggie, we all came home. All four of us.
And what of the promise that Jo and I made to ourselves? Thankfully it came true. We promised ourselves that if Maggie got better we would buy another camper (we hadn't had one for a few years as we were living by the sea) and take time out to enjoy the life we had missed out on. We'd get ourselves a T25 and go to see our friends in France. We'd spend time in ireland. We'd be free. We'd celebrate life.
Just a few months later we set off for Ireland on an adventure in our new van to see Joanne's family and tour the West Coast. Charlie slept on the front seat in a moses basket whilst Maggie slept upstairs. Funnily enough it was the only time we ever gave up. The weather was so bad that we checked into a hotel for a couple of nights in Dingle. I didn't mind at all and I know Jo was grateful for a proper bed. We were grateful just to be there in the first place. Wet and windy it may have been, but it was a wonderful time for us as a family.
So there you have it. That's why we do it. Because life is too short, even though we made it through. We're lucky. Not everyone on Maggie's ward did.
Whenever people ask me about how I got into camper vans I say that it's all about the surf. It isn't wrong. I first started travelling and hanging out in campers when I was in my late teens. But the real reason I love them so much is that the promise of camper van adventures offered us hope when we really needed it.
So it's a very happy birthday to Charlie. And a very happy seven years in remission for Maggie. And a big thank you to all our camper vans.
And that's why we do it.
http://www.clicsargent.org.uk/ 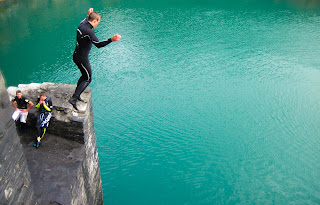