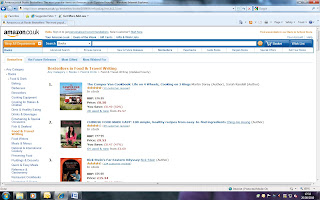 The Camper Van Cookbook got knocked of the top spot in the Amazon Food and Travel books chart again today. Since its release on 27th of May my camper vanning opus has been consistently at or near the top of the chart.
When I first saw this ranking I was so surpirsed and excited that I checked it every day. Days went by. Weeks went by. The Camper Van Cookbook stayed at the top spot. And then one day a couple of weeks ago I looked and I'd been pipped. I was devastated. Bereft even. How could this happen? How could this disaster befall my numbers? It was an outrage.
I noticed who had pipped me and I felt a bit silly. The leader of the pack was Rick Stein's Far Eastern Odyssey. Then I got the whole thing into prespective. Rick is a legend. He's a giant among the chef's whites. He's a fish guru, a traveller, a chef. He's even got a town named after him. So why am I complaining? If you told me a year ago that my book (what book? have I written a book?) had held Rick Stein off the top spot for even a couple of minutes I'd have told you to take a long run on a short pier. Or worse.
So I have become a little more relaxed about the rankings recently. I tell myself that I am non-competitive, that it means nothing, that everyone else has had a running start. I am a newbie. Since then I've been dancing with Rick a little, much to my amusement. I've been back up there a couple of times. I've even been back down to number three, behind Rick and those Hairy Bikers. And the day that the Food and Drink Guide was available for advance ordering I slipped a little too. The pups! Suffice it to say it was only a matter of hours.

(I wonder if Rick sits at home, unable to resist one last look at the chart before bed time? I'll bet he does.)