Welding, making and the simple things that make life great 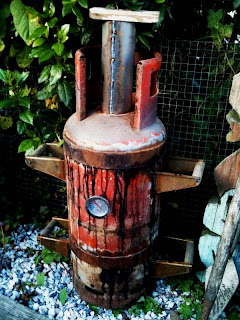 This post is devoted to hero worship. More specifically to my neighbour, Paul, who, with his bare hands, created the monster in the photo. For him, someone who mends engines, bashes out dents and resprays panels for a living, it was a walk in the park. It's second nature. Normally I wouldn't give this mechanical mindedness and dexterity a second thought (apart from when it comes to getting the van through the MOT) but when it got applied to something I really wanted to try for myself, Paul caught my interest and admiration.

Paul lives in the house in which he was born. He has caught and eaten more lobster than anyone of us will ever taste in our lifetimes and was brought up next to the best shrimping beach on the North Devon Coast. He goes out at low tide and fetches it if he fancies it. Lovely stuff.
So when Paul made his smoker I was astounded. We had been chatting about smoking fish in the pub and I was happily banging on about the once in a lifetime chance I had to visit Arbroath recently. I had learnt how to make the famous smokies and would soon be making a smoker for myself - especially since I had learnt all the tricks .
All I had to do was catch some fish and make it. Well, sure enough, in late August the mackerel came in. Amazingly I caught one before Paul did. Of course this was a red rag to a bull so, not to be outdone, Paul proved himself ever the coastal dweller by catching 30 the next day. And with too many to freeze, bake or fry he set to work with his welder. As you do when you can. A few hours later he had himself a smoker. And some fine oak smoked mackerel fillets too.
Some days later at the annual village party Paul's smoker puffed away merrily as my friends and neighbours gathered around it. Like gannets waiting for the sardine run we hung about, waiting for a first taste. We all knew it would be brilliant, simply because it was simple. Smoked fish, caught by rod and line and smoked at home in a home-made smoker. What more could you ask? A welding course perhaps?