The key to adventure: packing light 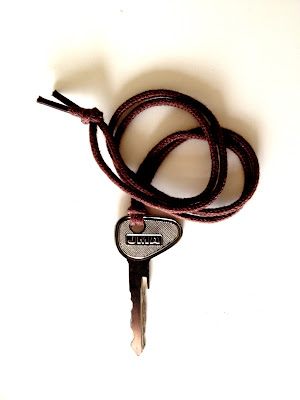 This is it. The key to adventure and the last bit of preparation I have to do before we hit the ferry to Roscoff on Saturday. It's something I always do before any trip in the van - sort out the spare key. It then goes round my neck until the moment we return. It's like my own personal insurance policy against loss, theft, silliness, drunkenness and carelessness. As long as this is around my neck we will be able to get home. In theory. I know, there are many other potential disasters that could befall us that are worse than losing the ignition key but it makes me feel good to have it there. So if we lose the main set of keys in the sand, leave them in a bar or get our pockets felt we'll always be able to fire up the old girl and hit the road again. We might not be able to open the doors, unlock the trailer or release our bikes but we shall drive.

It's not the only preparation we have done. I've imposed limits on baggage, numbers of socks per family member and agonised over what toys, books and equipment to bring. It runs in the family apparently. I have always quoted my grandfather as the king of packing but it seems he wasn't the only family member to impose dracoanian rules about what you can carry. As a young man he traveled the length and breadth of the country on his motorbike with nothing but the barest essentials. His limits were so strict that he would cut bars of soap in half to save weight. Then again that's nothing compared to my Dad. My mother told me yesterday that they went on holiday to Devon sometime in the early sixties in his 3 wheeler Morgan. Like my Grandfather he was always worried about carrying too much weight. In fact he was so concerned on that trip that he made my Mum go on the bus. From London. Nice one Dad.

I'm not that bad but I have considered it. For a moment. Actually I've been trying to keep up with the law when it comes to taking vehicles abroad. This year France imposed a law that all drivers must carry at least 2 disposable breathalysers in the car with them at all times. It's a great idea but it means another trip to Automate in Bideford to pick up more 'essentials'. Then there's the issue of rear mounted bike carriers in Spain. Thanks neighbours for putting the willies up me on that one. And not forgetting the beam benders, first aid kits, hi viz jackets and the EHIC. And so it goes on...

Thinking of heading off yourself this summer? You might need some of this:

Don't forget that we're still looking for suggestions as to where to head. We've had some really brilliant ones so far - Ile De Re, Les venises Verts and a nudist beach in Spain for starters. But we'd still like more. So, if you have been to the Atlantic coast of France or the north coast of Spain and have some brilliant recommendations, share them with us! We'll be blogging as we go.