Fabada: a taste with memories. 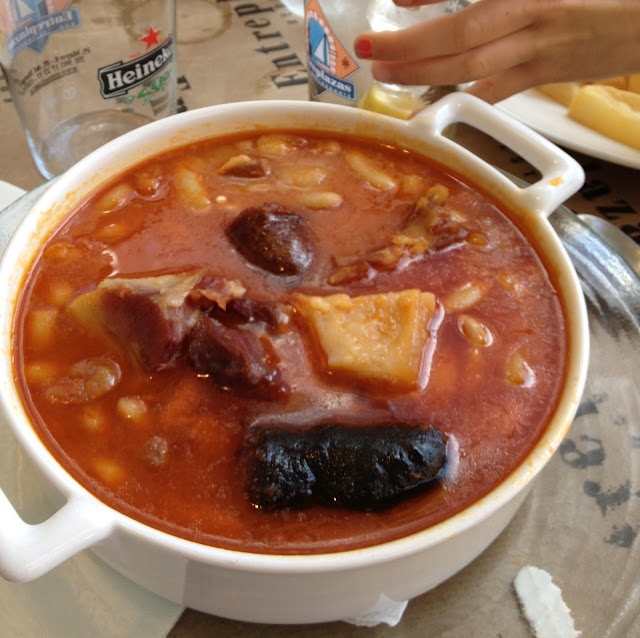 Yesterday I enjoyed my first taste of authentic Asturian Fabada for almost 15 years. It’s a traditional mountain stew made with fava beans, pork, smoked ham, black pudding and chorizo sausage that is cooked slowly in a big pot. It is a little spicy, salty and delicious and it inspired the bean and chorizo stew that appears in The Camper Van Coast.
I ate my first Fabada on my first long trip to northern Spain in the late nineties, in a bar at Rodilles, not far from Gijon.
The waves at Rodilles were a perfect six foot and looking about as good as I had ever seen but a deep gash on my hand - where I had been smashed into the rocks at world famous surf spot Mundaka a few days before – had kept me out of the water. The session at Mundaka had been epic, with waves at least double overhead rolling in for four hours until the wind changed and battered them to a frothing, frightening mess. For the short time it was on I surfed some of the biggest waves of my life to date.
The mornings were cold at Rodilles. It was November and few people were around. We’d been on the road for about three weeks. Watching my companions surf perfect waves from the camper parked in the forest was miserable. I felt very sorry for myself and probably wanted to go home. As the session in the water went on I strolled over to one of the bars and ordered a dish of something local to try and cheer myself up. The timing was perfect. The rich stew filled me up and warmed me up from the very first mouthful. I loved the saltiness, paprika and garlic and the rich, red, creamy sauce. It was simple and, of course, delicious.
Funnily enough, eating that Fabada is not an unhappy memory. I got back in the water a few days later with the help of a surgeon’s glove taped up with gaffer tape (very handy stuff for all kinds of situations) and, with just the right mix of terror, drama and perfect surf, the trip was declared a success. A couple of my pictures of Mundaka appeared in ‘The Surfer’s Path’ sometime later and Mart’s Bean and Chorizo Stew turned up in The Camper Van Coast this year.
There is a recipe for Fabada Asturias here.
You can see a contact strip of some of the Mundaka and Rodilles sessions here.