Journey's end. Time to turn and head for home. 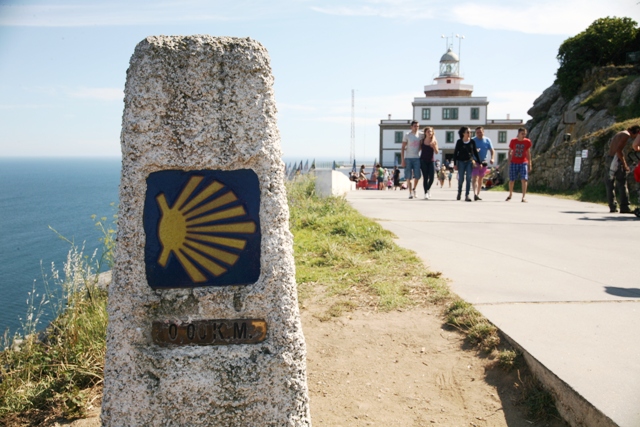 When we set out from home on the 30th June we had no itinerary other than a couple of things we wanted to do on our way though France and in to Spain. We knew that Galicia was a potential destination and that we wanted to try as much food as we could along the way, but no idea where our journey’s end would lie. The idea was that we’d go, find somewhere nice to hang out and then come home. It was a simple wish.
It was only in the last few days that what seemed like a right and proper end to our journey should present itself. We decided to visit the city of Santiago De Compostella and its magnificent cathedral - proof, if proof were needed, of the (former) might and power of the church. Said to be one of the most beautiful cities in Spain, Santiago's narrow streets, alleys and tapas bars did not disappoint. The reason Santiago is such a tourist spot is down to the fact that it is, and has been for centuries, a place of pilgrimage. It was once the third holiest site in Christendom. Today, thousands walk the Camino de Santiago, a pilgrim’s route across northern Spain. Many of those who visit Santiago then go on to walk to the Cabo de Finisterre. This is the most westerly point in mainland Europe. It was once the end of the known world. Hence Finis-terre, or, as we would have it, Land’s End.
For us, that was it. We’d take our little van to the lighthouse at the end of the known world, the place where, for thousands of years, many believed nothing lay beyond. Once we got there we’d turn around and head for home. It seemed terribly fitting: last year I took the family to the most north westerly beach in the UK looking for a fish and chip shop that didn’t exist; earlier that year I went to the most north westerly point in Europe at Bloody Foreland looking for a decent place to camp and some good waves. In writing The Camper Van Coast I very nearly hit all the points of the UK’s compass.
Once we got to the cape it turned out to be quite an emotional event even though we made sarnies, walked around a bit, refused to let the kids buy tourist tat and took a few photos. When we turned away and retraced our steps back to the camp site we realised that it was the first time in five weeks that we’d gone back the way we’d come. We were half done. That night we ate foraged mussels that we’d picked on a random stop during the day and talked about everything we’d seen and done. We had swum in mountain rivers, snorkelled Galician seas, surfed French beach breaks, kayaked down an overgrown river (with not at all hilarious consequences according to novice kayaker Joanne), met neighbours, old friends I hadn’t seen for more than 25 years and made a few new friends. With nothing more than a fish hook in the face (a bad cast from me that took me to a Spanish hospital in A Corunna),  a drunken toe-stubbing on the sliding door, a broken return spring on the accelerator cable and a broken shock absorber, we had done alright. So far so good.
We also saved a few adventures for the way home. We have yet to visit the Guggenheim Museum, try out a France Passion site or walk gorges in the Picos. Of course we still have until 4th September to do all that and more. We hope to catch up with friends in Arcachon for oyster eating, I have some filming to do for the BBC in San Sebastian and I still hope to score some of the waves of my life. And everyday, in between the adventures, we’ll be cooking as much as we can our two ringed stove.
Of course we’re certainly not the first to follow this route and there are many others who drive their modern cars and motorhomes further every week, but for us it’s a real adventure, taken at a snail’s pace, in our little red and white van, with time to stop and take it all in. We like it that way, and we especially love the waves and smiles we get everywhere we go. VW campers (the old ones) are rarities in these parts so we turn heads regularly. Lots of people are curious too: some we invite in to look around whilst others just stare from a distance. It’s nice to drive a relic and be an old fashioned looking curiosity, bumbling along in the sunshine with a tail of modern cars behind us, listening out for every rattle, squeak and knock. I wouldn’t change it for anything.
So here’s to the end of the known world, it’s home here we come!