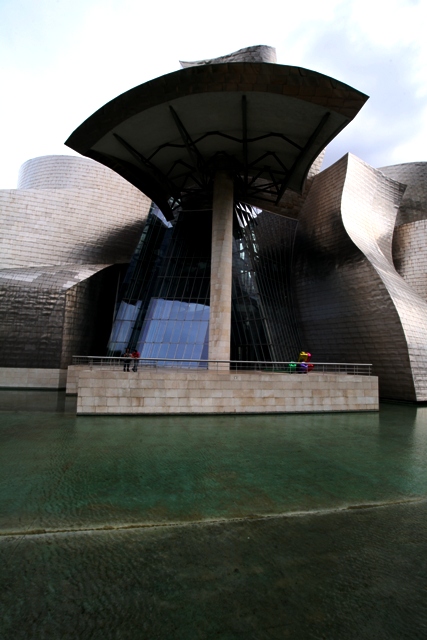 Bilbao. It was always going to be our last stop as our schedule was to see us leaving from Bilbao port on 4th September, to arrive in Portsmouth on the 5th. This would give us just enough time to drive to Bristol where we would drop the van and jump on a plane to Dublin for my sister in law’s wedding on the 6th. I have been to Bilbao before but had yet to visit the Guggenheim museum. It’s not for want of trying though.
In fact, I have failed to get into Guggenheim museums on a few occasions and also in New York. My first failed attempt at a visit was in about 1997 when I was waiting for a plane. I had some time to spare so thought I’d see if I could go and take a look at the building they had all been raving about. I got there well enough, despite my awful Spanish, but got there too late: it was closing. Never mind. Then, a couple of years later I passed the city in a camper van. This time my inability to convince my travelling companion that it was worth taking a detour to look at some art, rather than my inability to get somewhere on time, meant the visit would have to wait. As we argued about what art was and why it has merit, my philistine of a driver piloted the van past the junction and on towards the west. Besides, he wasn’t interested in the curves of a building he didn’t want to understand, he wanted curves of his own. There were waves and the swell wouldn’t wait forever.
Sometime later I made an attempt at the Guggenheim in New York, this time on a work trip. It was closed for refurbishment. Obviously.
This time I was confident that our planning would work out. We arrived at our hotel in Bilbao late in the afternoon and settled in, with a view to spending the whole of the next day at the museum. I checked the website, just to make sure. The Guggenheim is open every day from 10.00 until 20.00 during the summer. However, during the off season it is closed on Mondays. Oh no! It was 16.00 on the 2nd of September. That meant that the museum would be closed tomorrow, the day we planned to visit. On Tuesday we had to be at the port so we had to go now. I roused the family, packed them back into their shoes and forced them out of the door to find the local underground station.
We got there in time, thankfully, and were able to see David Hockney’s bright and breezy new landscape work, as well as some great pieces from the permanent collection. But of course the true star of the show is the building. It is vast, with gorgeous, metallic curves glinting, changing colour and dazzling in the late afternoon sun. Its position is perfect, entwined as it is with existing architecture, bridges and the river. The exterior space around the building felt alive too, and was well used, with coffee bars, flashing cameras, children playing in gushing fountains and Spanish families enjoying their Sunday afternoon passeo in the sun. It was a lovely place to spend the early evening. The girls cartwheeled in front of Jeff Koons’ giant flowering puppy and we toasted the final days of our trip. We had done so much of what we had set out to do, including visit, for the very first time, but not the first time in trying, one of Spain’s most remarkable buildings.