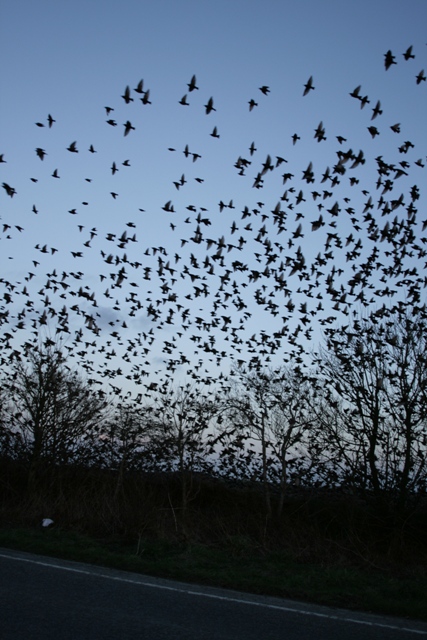 I have noticed twitching activity on twitter in the last couple of days. A few people have posted pictures of swarms of starlings making beautiful shapes in the winter sky. Twitchers call it a murmuration. It's one of those most lovely of winter spectacles and is truly mesmerising.

Safety in numbers is what brings the starlings together. They begin to form flocks in autumn and then are joined by migrating birds as the winter progresses. In choosing their collective roost for the night they gather in enormous numbers, flying in flocks of thousands and possibly even hundreds of thousands. Watching it happen is delightful. The flock moves as one, like a cloud of black dots, changing direction in an instant and creating ever evolving shapes against the early evening sky. Sometimes you might see birds of prey dart among them, scattering the flock and creating tumbling, twisting and turning shapes as each bird evades capture. It’s a truly wonderful thing to see.

I see small murmurations on a daily basis out of my office window. Some are small, with just a few twitching in the grass. Occasionally though they build to a chattering crescendo before taking off for somewhere else. Like the very best things in nature they are fleeting and so all the better when you do see them.
If you’ve never seen a swarm of starlings in the winter sky then I urge you to head out at dusk. But don’t hang about. They aren’t what they used to be. According to the RSPB the starling population has crashed by up to 70% so we are much less likely to see murmurations than we might have ten or twenty years ago. If the RSPB is right and loss of habitat, lack of food, destruction of roosting sites and a change in farming methods are causing the starling population to decline rapidly then go take a look before it’s too late.
You can see starlings roost all over the countryside but Gretna Green in Dumfries and Galloway, and Brighton Pier, Sussex are earmarked as top spots by the RSPB. They also name several of their reserves, including Leighton Moss, Lancashire; Saltholme, Middlesbrough; Ham Wall, Somerset; Newport Wetlands, Newport; and Snape, Suffolk as good places to see one of Britain’s truly epic animal events.
Closer to my home, there are almost always giant murmurations on the Hartland Peninsula where the shot above was taken.