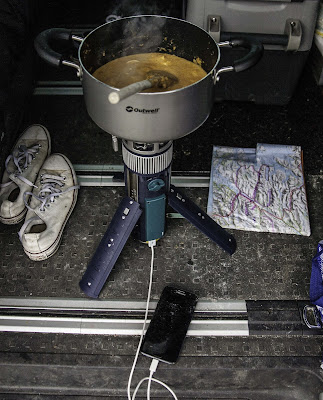 Some time ago I was approached by the people at Tegstove. They asked me to try out one of their stoves. It uses Teg technology (creating an electrical charge by placing hot and cold surfaces together) to charge an internal battery in the stove, which can then be used to charge phones or gadgets.
I said yes, because I like trying out bits of kit, but I did make a point of insisting that I would be honest about it because I only review products I actually use, whether good or bad.
In due course the stove arrived and I unpacked it and read the instructions and looked at it and played with it.
And then I put it away again.
Why? Because I hated it. I couldn't see the point of it. I couldn't see how it could possibly be useful to anyone who is serious about camping. It looked gimmicky and nothing more than a bad case of form over function.

Here's why:
It's heavy. It weighs 1.4 kg, which is about 1.2 kg heavier than the Vango folding stove I use for lightweight camping. That means that it's not practical for anyone who is cycle touring or backpacking. You simply wouldn't want to carry it in your rucksack.
It charges phones. But so does my camper van, so why wouldn't I use the van to charge my stuff and get a lighter weight stove? My van also has a stove. Why wouldn't I use that?
It takes disposable gas canisters, which are expensive.
It stands tall, at 365 cm when open, which means it would be very difficult to erect a windbreak for it, unless that windbreak was at least 2 feet tall. The height also means it wouldn't be practical to use inside the van, on a table as it would create too much heat too near the roof lining.
That was that. I couldn't see who might benefit from such gadgetry.
It wasn't for me. I didn't write the review.

Then I went to Scotland with my daughters. The Tegstove, which had been languishing in the van, came with us. On our last night we were pitched up at Bunree Caravan and Motorhome Club site near Fort William when the gas ran out on the Slidepod stove halfway through a curry. With no spare and no other way of finishing off the curry, I had no option but to fire up the Tegstove. Reluctantly.
So, I thought, I might as well test it properly while I am here, using it in the field.
Hyper cautious, I unpacked it, spread the legs as far as I could make them go and twisted a half full gas canister into place. I opened the pan supports and placed the curry on it. I turned it on and it lit easily, as you'd expect from the piezo ignition. The flame, fierce and oxygen rich, wasn't affected by the wind too much and the dinner went on. And so did my test. I plugged in my phone to the stove and, as promised, it started charging immediately, which was a bit novel, to be honest.
As the curry simmered away I examined the flame. Thanks to the Teg technology, the act of charging creates heat, which is used by the stove to warm the gas canister. This solves the problem that these type of canisters have, which is to lose pressure as the remaining gas cools. The heat applied by the electricity generating technology to the canister keeps a constant flame, which means it'll give the same heat, right until it runs out. Sure enough the Tegstove simmered our curry until it was perfect, just before the canister ran out.

I took a picture of the Tegstove in use and put it away. I still wasn't convinced that it would be useful to anyone but was nevertheless impressed by the technology. As a stove it worked. As a charger it worked. As a power source it worked. Nice. But what about that weight issue?
I posted the picture to Instagram and forgot about it. But, when I checked back I was surprised by the reaction, which was pretty good, to be honest. Lots of positivity. Was I missing something? Then I read one comment, which stood out from all the others.

A friend, Cal Major, said "Whoah! I need me one of those."

And that's when it dawned on me that the Tegstove is an awesome bit of kit. Why? Because it's perfect for people like Cal. She is a paddle boarder and recently paddle boarded around the isle of Skye, camping wild each night. Before that she paddled her board around the coast of Cornwall, often camping away from anything. I could see how having a battery pack that could charge a phone or GPS would be more than useful - it could be a lifesaver. I could see how being able to recharge that battery pack when cooking could be very useful, especially at night when a solar panel wouldn't cut it. And I could see how the propane flame and the warming effect of the Teg technology could make cooking a lot more efficient. And I could see that the weight and size wouldn't really be an issue for someone paddling a SUP. Or paddling a kayak, or riding a horse or a motorbike.

Finally I could see that it's not really aimed at me. But if I were to head off into the wilds at the helm of something, I would surely want it by my side.
Perhaps I should give my Tegstove to Cal?
No. Not a chance.
I love my Tegstove.

Get your own at http://www.tegology.com/