How much do we really need? 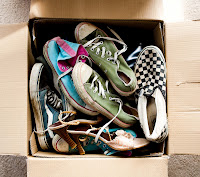 We've started putting things in boxes. It's all a part of the process of preparing for a trip. We need to sort out what goes in the van, what goes in the loft, what goes to the car boot and what gets recycled. Much loved old shoes, of course are destined for the loft. Their value is greater to us than the average carbooter.
Some of the lucky ones will make it to the van, although not many. I mean, how much do we really need?
In the early nineties I went backpacking for three months and took nothing more than a couple of pairs of shorts, a surfboard, a pair of sturdy walking boots, some flip flops, a few tees and some bits and pieces of camera gear. I also carried, for some reason known only to my stupid self, five volumes of Vikram Seth's 'A Suitable Boy'. They took up so much space and could have easily have been replaced but I "didn't want to be parted from them". What an idiot. It's a lesson I've learnt the hard way: take only that which you need - really need.
We're going through this painful yet liberating process (it's called the 'scourge' in our house) because we're heading off on the trip we've been promising ourselves since the kids were little and one of them was in hospital with leukaemia. It's been a long time coming but, after two books, a TV series and five and a half years of running my writing business (at the same time), we're tripping off on an extended summer holiday to catch up with friends, cook some dinners under the stars and come up with some new ideas. I can't wait to cast off the clutter and get back to simpler times.
Hence the scourge. We're lucky that we live in a place where we can rent out our house as a holiday home - and it'll provide us with a little income whilst we are away - so we need to depersonalise and reorganise. It seems like a lot of work for eight weeks in the van but it's what makes it possible. Besides, it's good to have a rethink every so often. Scourges focus the mind.
So, back to what we really need. The simple answer is that it's an awful lot more than it was before we had children. There's a lot of stuff to pack in. They have stuff they can't live without, like toys, games, notebooks and various electronica as well as clothes. And the Zebra. And Little Doggy. And Big Doggy.
Then there's the stuff we actually need to live. That's cooking pots, plates and cutlery. Then there's the stuff to keep us warm and comfortable. That's clothes, pac-a-macs, shoes, sleeping bags, pillows, camping chairs and levelling chocks. Then there's the solar shower, the porta-potti and the toothbrushes and the stuff we need to stop us from getting lost: books and maps.
Next it's time to think about the other bits and pieces. This is the fun stuff. The toys. There are wetsuits, snorkels, flippers, bikes, surfboards, belly boards and bike helmets. Lastly we have the stuff that's nice to have too. Nets, rods, smoker, barbecue. All in all it's an awful lot of stuff. There will barely be any room for us. Sometimes I ask myself if I have learnt anything along the way. But I can't go on a trip without a board, or maps or a sleeping bag, can I? And the kids can't sleep without a cuddly toy!
I am sure that we could have a perfectly good time without most of it, and as long as we are well fed, warm and dry, I don't think it matters. But we'll pack it in anyway. I will play the martyr and pack as little as I can. Of course, if previous trips are anything to go by, my wife and children will appear for tea every night dressed in something different that I never saw before on the trip, whilst I, like a fool, will be wearing the same old tee shirt and with nothing to sit on other than a big old pile of Vikram Seth's finest work.