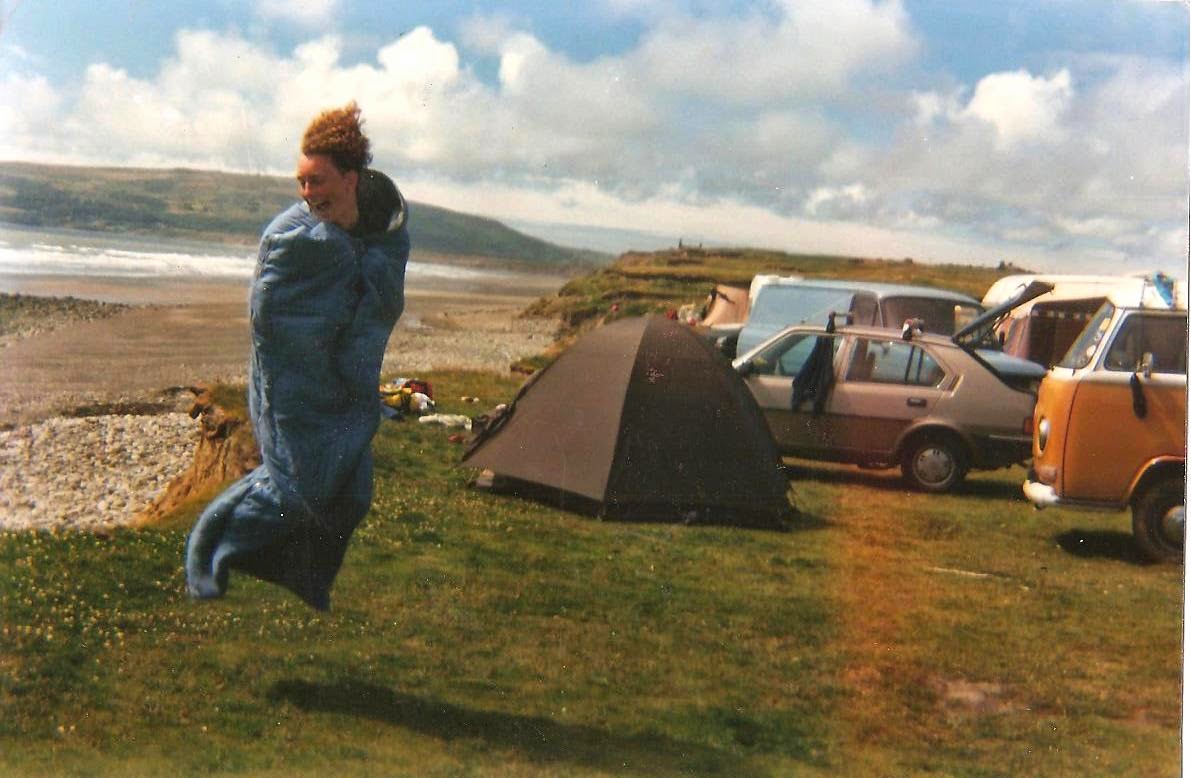 There used to be a campsite at the southern end of Hell’s Mouth beach. The location was perfect but the facilities – one stinking, broken loo in a tumbledown shack and a fresh water tap – left a lot to be desired. It was basic and cheap but somehow perfect. On a low cliff overlooking one of the area’s best surf breaks, it provided a base for surfers riding the waves of this famous spot. We’d leave a few quid on the window of the farmhouse as we passed and pitched as we wished.

The only problem with the field was that it had no shelter, so when the wind blew you really knew about it. Even in August a fresh south west wind could tear apart our camp and keep us awake with flapping canvas and lashing rain.

It must have been howling the night we decided to pitch in the dunes because we left the car on the camp site and trekked some way across the stream. There would be no other reason for leaving the flat clean grass on the campsite other than to escape the wind.

We went off to the pub, came back and went to bed. I was woken at first light by wet canvas across my face, my duvet soaking wet and the dome tent billowing like a sheet in a storm. The flysheet had worked loose (probably something to do with the pegs being in sand) and was flapping madly while the inner tent, which wasn’t waterproof, was leaking water all over me. This was because the wind had changed and was now blowing straight down a gully between the dunes. With a funnel effect making things worse, we were being battered. The gusts were so strong that they were blowing the tent almost flat on my side, creating a bulge above Nick. He slept on, snoring quietly in his drink induced stupor.

Unable to sleep any more, I got up, wrapped myself in the damp duvet and trudged off down the beach to the car. When I got there I found that there were other campers on the field. They had arrived while we were at the pub. It was a family of four: parents and two children. Dad and son wore khaki shorts with long socks and tank tops whilst mum and daughter wore pretty flowered dresses under their cotton storm smocks. They made a startling sight, more like a company of cheery Nazi Youth than campers making light of a storm in North Wales in 1987.

They were up and about, making breakfast, hanging out their washing and getting ready for the day ahead. The fact that it was five in the morning was odd enough but what was more disturbing was the way their tent, a heavy duty A-frame tent in grey canvas, barely moved, let alone flapped. Dad’s Brylcreamed hair remained staunchly parted.

If they were surprised to see me appearing from down the beach wrapped in a duvet they didn’t show it, and carried about their business as I clambered into the back seat of the car and attempted to go to sleep again. They were clearly better at this camping lark than we were and had had an awful lot more sleep than I had.

The last thing I remember before nodding off was the dad banging a large wooden peg into the ground in front of their Ford Transit van with a wooden mallet. Nailed to it was a copy of their number plate. I could only assume that this was to show the other campers (me) that this was where they parked and that other cars should not park on that space.

Later that day, when they had gone off to buy groceries, we parked in their spot, just to annoy them.

Ours was the only car on the camp site.