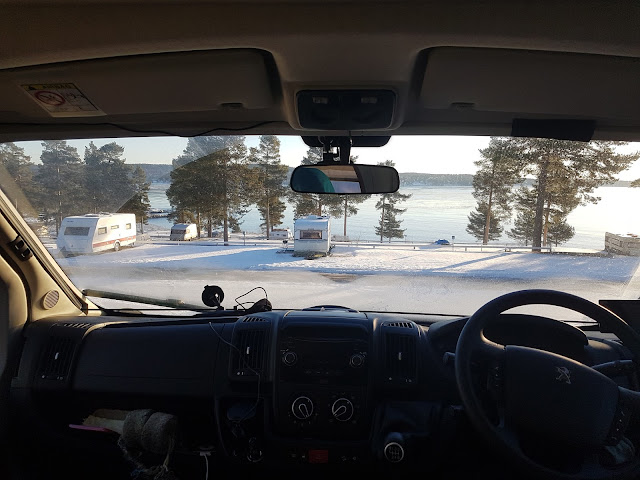 I woke before the sunrise at Sundsvall. I was very glad I did. We had parked the motorhome facing the view, so the minute the kettle went on I opened the blinds to check what the morning was threatening to bring. The timing was perfect. A deep and dark blue sky was giving way to an orange glow from the east, directly opposite our pitch. I got out of bed and walked carefully (it was very icy and steep) down to the water's edge to get a better view of the sun rising over the opposite side of the bay. There were huge chunks of ice floating in the water at the edge of the campsite, bobbing in the tiny swell. While I had recently walked on frozen lakes and rivers and been in a vehicle driving over an ice road to an island, it was still an inspiring experience to see chunks of ice in the sea. You should never get blase about sea ice. And while it was warmer than it had been, it was certainly pretty parky. Later on I actually regretted not stripping off and taking an icy dip. Which is all very well with hindsight I suppose.
The drive on day 14 brought us to Gothenburg, some 400 miles to the south. While there was still ice and snow in the city, it was warmer and the countryside became less and less white the further south we travelled. I began to miss it. Instead of bright white fields, frozen trees and snowy roads we returned to the greys of winter like we have at home. That was a bit of a come down. But it also meant our adventure was coming to an end. 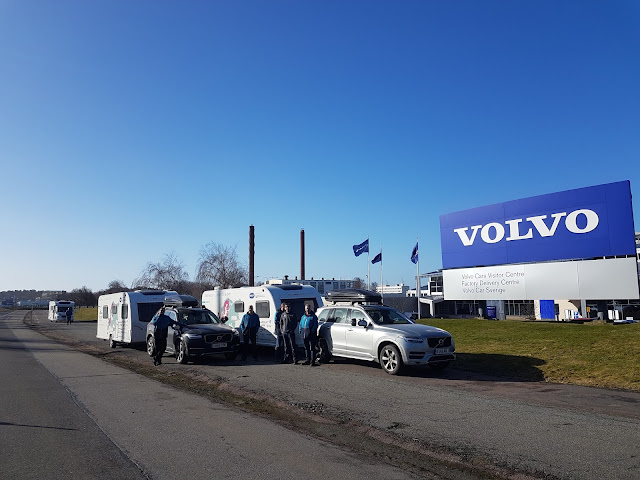 Day 15 started unlike others in that we had an appointment with Volvo cars at their enormous plant in Gothenburg. After a quick press call outside the factory (the motorhome had to hang back on this occasion) we took a factory tour in a little train. Sadly we had been booked on a Swedish language version of the tour so, whole the tour guide was very nice, I, for one, understood nothing of it. So let me tell you that it's an enormous place where they don't allow cameras or phones. Around 30% of the workforce are women and there are lots of robots doing welding and putting things together. The plant is on a vast scale, very clean and ruthlessly efficient (or so it seemed) and a little bit frightening if I am honest. But that's the nature of the car biz. 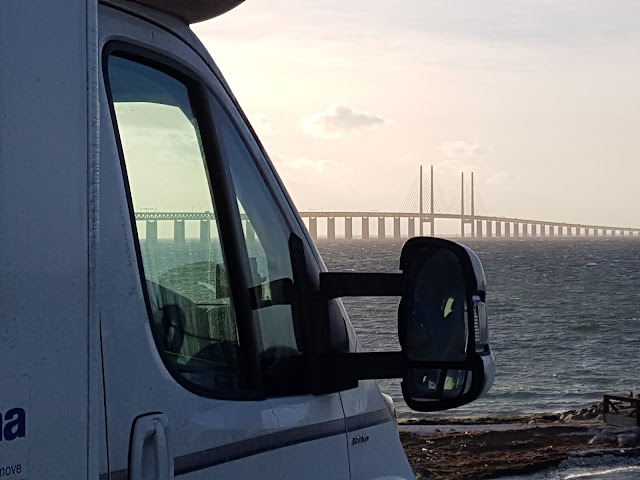 Before the day was out we crossed the magnificent Oresund Bridge from Sweden into Denmark. It's an absolute cracker at 5 miles long. It also turns into a tunnel when it 'lands' on an artificial island and then goes underground for another 2 miles. I can't say I have ever crossed such a wonderful bridge and it was a real honour to be able to. Another remarkable experience on this once-in-a-lifetime trip to the Arctic.
The trip as a whole offered me some truly unique opportunities. While the driving was tough the moments between - meeting Santa, seeing reindeer, driving the ice road, crossing the bridge - will stay with me for a long, long time. The team were exceptional company and the vehicles and Bailey caravans and motorhome outstanding in that they were warm and comfortable and dry. And with a steady supply of jelly babies to keep us amused during the long hours at the wheel, we pretty much had it all.
The final day presented the biggest driving challenge of the trip. Around 500 miles to Hook of Holland for the ferry home to Harwich. We left at dawn and arrived at the port at around about 8pm. A real heavy duty day. But no matter. We were only 24 hours from home.

So. Who said you can't camp in winter? Not me.

Check out the arctic adventure on Bailey of Bristol's blog. It is inspiring stuff.