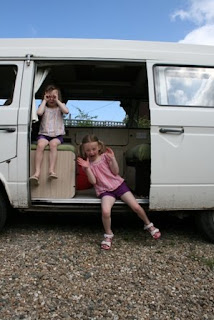 It was an emotional weekend for all of us. We said goodbye to our third VW T25 Camper Van, Pootle. This lovely white 2.0 litre air cooled Devon conversion from 1981 has seen us through some great times, a lot of miles and some wonderful meals. He's a little bit famous too, having appeared in The Mail on Sunday, The Independent, Coast Magazine and Devon life (more than once). Get him! And let's not forget that without Pootle The Camper Van Cookbook would still be on the driveway, waiting for the off.
But as is often the way, the time had come to send him off to pastures new. We shall miss him.
Don't panic though! He hasn't gone to the great camper van camp site in the sky. No! His number won't be up for a long time yet. With 95K on the clock there's life in the old block yet. 30 years is nothing for a Dub like Poots.
He's gone to live with Blair, Liz and 6 month old Joseph. They have promised him a whole new lease of life - because they intend to use him for their Great London Getaway. We're all for it. He'll see some proper action at last. None of this Pootling down to the beach for a surf, a cup of tea afterwards and maybe an impromptu photo shoot. He'll get to see some places. We're a little bit envious.
If you see him in E3 or on the motorway, give him a wave and send him our love. Cheers Poots. Thanks for the rides.