Showing posts from November, 2010
Show All

How is the band? Dunno. Gonna watch it later. 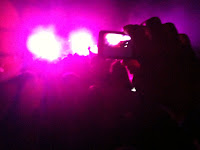 I went to see a band this weekend. It's nothing special to do that, I know. But it was the first time in a while for me so it was a real pleasure. I loved the way the bass churned my stomach as I walked into the auditorium. I liked the way the beat made my trouser legs vibrate. I enjoyed hearing the hiss of the smoke machine and being able to turn around to see smiling faces behind me enjoying the music. I even quite liked the sweet and sickly smell of the excited teenage rocker standing next to me. It was all about the experience you see. And even the slightly rancid bodily whiff of a soap dodging music fan is a part of that. That's the point of seeing music live. So why then, so many iphones held in the air? Why do people spend entire concerts filming the concert? Do they watch it back when they get home? Do they upload it to youtube? What's the point? It's never going to be the same. Compared to being there it'll be awful. You'll never capture the true esse
3 comments
Read more

Thank your lucky stars and give them a hug

I love wind farms. I know a lot of people don't but I do. The reason is very simple. It's because they represent a faith in doing things in other ways. They represent smarter ways of making energy without making a big fat mess. They give me hope. And that's why I took this picture yesterday. It's of the new turbine at Morwenstow on the Cornwall/Devon Border. It's pretty isn't it? Now I know that lots of people object to wind turbines because they are noisy (allegedly), will make house prices plummet (really? So it's not the economic turmoil that's doing it then?), kill birds by the bucketload (have you seen how big the sky is recently? Birds aren't that stupid) and are an eyesore (compared to...?). Well, whatever. You may even be right. But there's something that everyone should consider before objecting to a wind farm. If you live in an area of unspoilt natural beauty then you should be grateful that they never found coal or diamonds or china
3 comments
Read more

In praise of the silver darlings of the sea

Yesterday was all about local specialities. I began the day with a breakfast of seaweed picked from the local beach. Laver, as it's known, is easy to spot but takes an age to cook - about 4 hours. For that reason it's not top of the list for camper van breakfasts. But it's a local North Devon delicacy so you can't live here without trying it at least once. I have bought it a few times from the local chippy, where they sell it deep fried in batter. I've never been particularly sold on it. Can't think why. So I thought I'd cook it in the traditional Welsh way rolled in oats and cooked in bacon fat. It was really very nice indeed. A bit like you would want a girder to taste if you had to eat girders. Full of iron. Next up, a trip to Clovelly, a small fishing village a few miles down the road. It's a very beautiful place that now relies on tourism rather than the sea. Despite this massive shift in the village's industrial fortune there are still some d
1 comment
Read more
More posts