Where shall we go next? 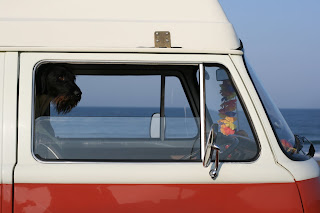 Summer went out with a big bang this year didn’t it? Our standard prediction of a glorious late summer run of great weather in the Westcountry almost went awry until the last dying moments of September. Then we hit gold with a few days of high temperatures and a couple more of high waves. We like to think of it as our reward for August’s drizzle and flatness.
For me, the last morning of this late year brilliance was spent putting the finishing touches to a wonderful six months of writing, travelling and cooking. Just before the sun disappeared behind the heavy clouds of autumn proper I slipped under the wire to snap a shot that I hope will end up being the cover of The Camper Van Coast (it's not the one above). I’m glad I ditched everything for a dash to Widemouth Bay because the way it seems now it’ll be the last time we see a deep blue sky for a while. Or will it?
We’re already planning our next great escape. The line has been drawn under one big adventure and it’s time to plot another. The Camper Van Coast is now in the hands of Elizabeth, my editor, so I don’t have to worry about it as much as I did a few weeks ago. She and the designer will do a fine job. All I have to do is die in a ditch over some minor point or other from time to time, then eventually concede. Or not. It’s the part of the process that can be uncomfortable but also extremely surprising. Usually it’s a great and pleasant surprise to see layouts, spreads, the way it will be. The monster that began as a conversation during a walk on Peppercombe Beach more than a year ago is coming to life. I have loved writing it and the next stage is to send it off into the world and hope that everyone else loves it too. That, I hope, will be in April next year.
But in the mean time, just as we are about to catch our breath and read the paper by the fire for a couple of nights, we are planning our next great escape. That’s the way it is with escaping. There always has to be a plan. Without one you’re just sitting around, doing time. Don’t ask me where we’ll go because I really don’t know. But the proverbial map is spread out on the floor waiting for those proverbial pins to be put in it. So far we have a start and an end. The first is a week in Ireland in May at the best beach I’ve ever been to, Derrynane on the Ring of Kerry. We are meeting old friends for a celebration of birthdays and anniversaries and will be raising glasses to health and happiness. With any luck we’ll also go surfing, play on the beach and perhaps catch a fish or two. At the tail end of next summer we have a wedding to go to, in Dublin. That’ll be a cracker, as they always are.

So that’s the bookending sorted, now what about the bit in the middle?
I want waves. The kids want snorkelling. Jo wants warmth. Bob, as always, wants a decent walk. We all want to relax and have some fun. And after the 5,000 or so miles I’ve done this summer the van will need a run out too.
Ideas anyone?