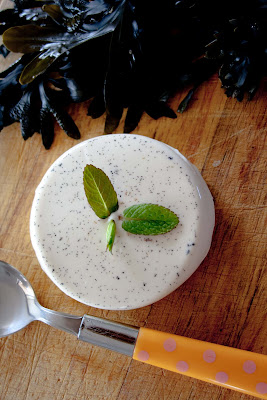 A few days ago I got a call from a friend. We talked about a whole bunch of things but ended up on the subject of seaweed. As you do. I mentioned a recipe that I have which uses carrageen moss - a seaweed which grows in abundance on our local beach - to which he blurted out “panna cotta!”
After the call ended I thought about it. Then I pulled on my wellies and went for a walk.
Carrageen Moss has long been used for puddings, particularly in Ireland. It contains a natural thickening agent which can be extracted from the seaweed by boiling it in water from fresh. I use fresh (rather than dried) carrageen for making the Irish Moss cocktail that appears in The Camper Van Coast, so I’m reasonably at home with it. Even so, using it can be a little unpredictable. There have been times when my Irish Moss cocktail has set - which it isn’t supposed to do -and turned almost blancmange like. Oops. But still tasty.
Somehow I’ve never done the obvious and used this type of seaweed for making puddings. Probably something to do with my Irish wife claiming that carrageen pudding is ‘grim’. So, rather than making it the starting point in my education, I dived straight in and recreated a potent local drink I had once on a fabulous trip to Barbados. Mind you, it’s very good.
Anyway, the mere mention of panna cotta got me buzzing. Be-wellied and inspired, I went to the beach and picked some.
Making my seaweed panna cotta was very simple. You could even make it in a camper van – as long as the fridge is working. Boil a handful of carrageen moss for about 10 minutes in enough water to cover it. Strain it and keep the thick liquid. Then bring a mixture of 300 ml of double cream, about 150 ml of milk and two tablespoons of caster sugar to a simmer, along with the seeds of one vanilla pod. At this point you can add a little more sugar if it isn’t sweet enough. Then add about 200 mls of the seaweed jelly (you can see why it can be a bit hit and miss here, right?). Bring to a simmer again and then tip into ramekins. Leave to cool long enough to set. Then dive in. Whilst I’m no food photographer - and only have a sorry arsenal of ‘props’ at my disposal -I did my best to do justice to what turned out to be an absolutely delicious, creamy desert. Does it look as good as I claim it did? The only way to find out is to try it for yourself.