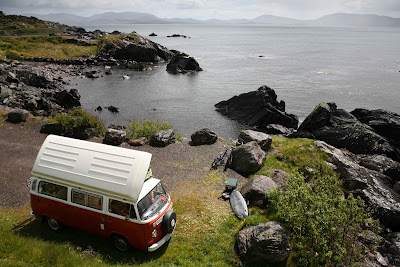 Don't all jump at once, but I think I may have found a new favourite pitch. It's no secret but it's a way away for most of us. It's at a campsite called Wave Crest in Caherdaniel in County Kerry, Ireland and it is about as close to the sea as it's possible to get without pitching on the beach itself. A well aimed cast would see you plopping your spinner into the sea with ease from the pitch we chose. I love that. I also love the fact that the campsite, whilst not among the cheapest sites you'll ever visit, is laid out in such a way that every pitch feels private. This is down to the way it has been shaped from the hilly cliffside. Paths lead off to quiet corners where you can pitch your tent with nothing but a sea view. If the wind blows there are nooks and crannies where you can find shelter away from the Irish weather or send the children off to explore. You can even camp on your own little island. That's the one in the photograph below with the grassy causeway. Not too shabby huh? If you pitched up there you wouldn't even have to worry about being good at casting. You could let the brake off and dangle your tackle in the briny without taking more than a few steps from your door. I didn't catch anything at Wave Crest but you may be a little more lucky. 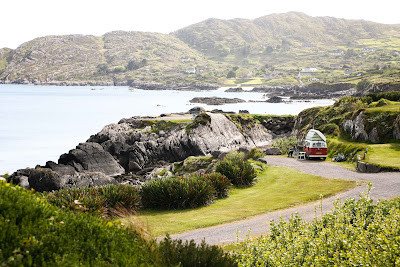 On the Ring of Kerry the water is as clear as you could ever hope for. As you stare into the depths you can see the seaweeds swaying in the currents and schools of small silver fish darting from one panic to the next. Where there is sand you see patches of azure, even on days when you'd expect a sea to match the mood of the sky. At the very sheltered O'Carrol's Cove nearby (below), the beach seems to belong more to the tropics than Ireland's temperate shores. One sunny day we ate lobster alfresco under a hot sun as our children splashed in the water (albeit with wetsuits on). Dreamy times indeed. O'Carrol's Cove claims to have Ireland's only beach bar but seeing as we could think of at least a couple more, we wondered where the logic came from. Even so, the food is great and the views of the cove from the terrace are stunning. All you need to do is make sure you face east or you'll get an eyeful of the mobile homes at the back of the strand. They won't spoil your fun but you can't help thinking that another well laid out campsite (or no site at all) would have been better. Then again, if it's deserted sand you want, a short cycle will take you to Derrynane Beach, my hands down, no contest, most favourite 'best beach in all the world'. It's wild and beautiful on any day but with a light easterly, some south west swell and a blue sky there is nowhere better. 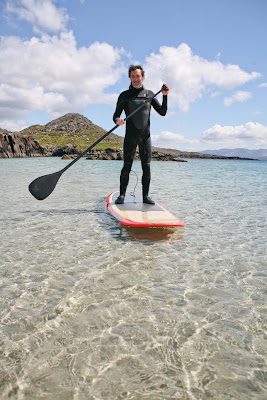