Toes in the mud. Cockle picking on the Ile de Noirmoutier 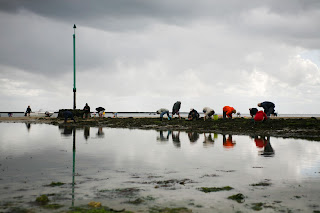 We arrived on the island just a few days after landing at at Roscoff following a recommendation from ‘Cool Camping France’. The island, which is a little south of the mouth of the Loire, is beautiful, with lovely coastal scenery, dunes, salt flats and pine forest. The camp site - as recommended to us as being cool - is right next to the sea and is very nice. Not amazing, just very nice. We had a good spot under the pines about 50 yards from the sea so I shouldn’t complain, although camper vans aren’t allowed right next to the beach as they are trying to protect the dunes from erosion.

The first clue that this is a famous place for cockle picking was the shower block on the camp site, where there is an area reserved for cockle cleaning.
Next was the amount of people wandering past our tent with wire baskets and three pronged forks heading for the sands. I followed them to the edge of the beach and was stunned by the sight. It’s something I have never seen in the UK: whole families bent double, raking the sand for cockles. It’s more event than foraging expedition, with generations of the same families working the mud together. The Taw and Torridge Estuary has cockles (admittedly not as big) yet we get strange looks when we go searching. We’ve lost touch.

At the peak of the cockling day, at low tide, there must have been over a hundred people scouring the mud. It was like waking up on an October morning to see hippies in the mist looking for magic mushrooms.

We followed down to the strand, except we had no rakes or buckets. We took our folding spade (which I was told was illegal so had to promptly put it away) and a plastic bag and headed out onto the mud flats. It soon became obvious why this area is famous! Poking your toes into the mud and wiggling them about revealed small, plump, ridged shells, almost every time. We set to work, pushing our feet into the mud, excavating the sand in search for the speciality of the day. Occasionally one would squirt water in protest but it went in the bucket anyway. We also found hermit crabs, crabs and worms, but we had no eyes for those. It took us about half an hour to find about a kilo. That was enough.

I asked a local what they do with their cockles and he said they need to be soaked for 24 hours in seawater (or fresh water with lots of salt), then cooked with crème fraiche, a béchamel sauce or in a provencale sauce. I think some spaghetti, garlic, butter and perhaps some spinach and crème fraiche will do for us. If they are as sweet as they say, then we’ll keep it simple. As always. 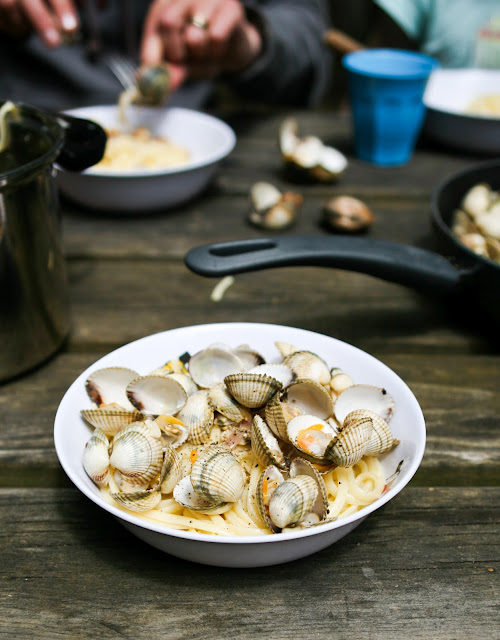