A day out with Dan 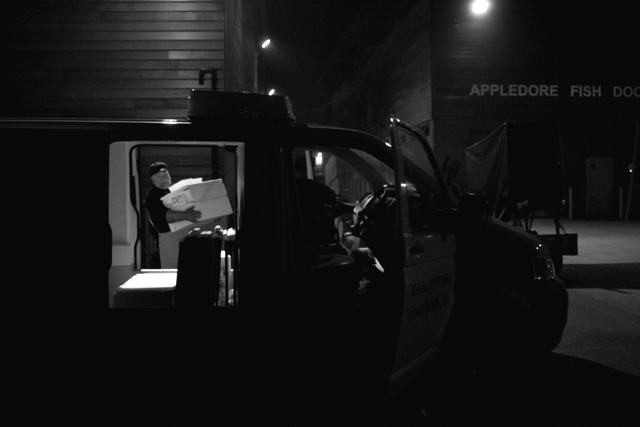 Dan Garnett is a celebrity in north Devon. Having graced the telly a few times, contributed to a number of food books and made himself available to food festivals and events over the last few years he’s become a face of all that’s great about the region. He’s a local treasure. He’s also a fishmonger. So, if I said than Dan is ‘Dan the fish Man’ would that ring any more bells? Perhaps.

Dan runs a fish stall that he takes around to north Devon towns each day of the week to sell his fish, which he gets from local fishermen and the fishing co-operative at Appledore Fish Dock. He’s a funny, smiling, chatty old soul who talks the talk and dresses the part in trawlerman’s boots, stripey t-shirt and fisherman’s cap. He’s always got a recipe idea, bit of advice or just some idle patter for his customers and they love him for it. He makes you feel wanted and valued. Today we’d call it customer service.

When I was writing The Camper Van Coast I asked Dan if I could spend a day with him. I wanted to pick his brains for a few tips and generally engage in a little bit of fishy chitchat. As someone who loves to cook and who is curious about food but has no formal training I wanted to immerse myself in his world so I could understand it better. I wanted to be able to know what I should and shouldn’t be eating and to be able to greet new and different fish like old friends – something I knew would make a trip to any fishmongers more fulfilling and – ultimately – more successful. I wanted to find out his side of the story.

I met Dan on a cold April morning before dark at Appledore Fish Dock. Almost as soon as I had jumped out of the van he had put me to work. For the first half hour I shovelled ice in a freezer. Then I carried boxes, washed fish crates, selected stock and packed up his van for the long drive to Hatherleigh market. I had to be honest and say that it wasn’t what I was expecting, but Dan is smart and you don’t get something for nothing with him. As we worked together he threw questions at me, teasing me with snippets, making me laugh with his jokes and offering his world in bite sized chunks.

At Hatherleigh Dan made me his errand boy for the day. I helped him rig up the stall, fetched his tea, filleted piles of fish, served customers and took money. All while learning a little about the trade. It was fascinating to see Dan at work, chatting up the ladies, being mates with the gents and dishing out the good feeling along the way. The recipe ideas are all part of the package – like a discount that keeps them coming back.

At the end of the day I was exhausted but I was also buzzing with ideas. During just a few hours I had learnt so much I could barely take it all on board. I also found out that it’s hard work being a fishmonger.

When it came to serving customers I felt so ignorant but as they day wore on I actually felt empowered as I discovered just how much I had learnt - and knew already. Every scrap of information I could process was put to use making fishy chitchat. I guess that’s what education does. It was remarkable just how invigorating it could feel to be directly benefitting from a mini hands-on tutorial with an expert who loves his subject.

So, if you ever get the chance, ask questions, hang about, be curious. Make a nuisance of yourself even. I’m not saying that everyone should go out and work for the day for their favourite food supplier, but asking questions never hurt anyone. If you feel stupid asking, don’t be put off. If they value you as a customer and give you the time you certainly won’t be stupid once you have your answer.

It might even turn out to be fun. It’s certainly one of the best things I have ever done.