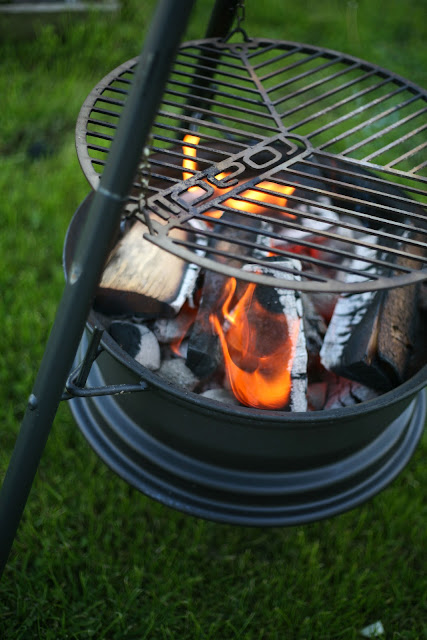 If you are one of those kind of campers who say that camping isn't camping without a camp fire then you'll love what I've been testing recently. It's a Roadii Grill and I was sent it by Simon Benton, the man who developed it with the help of his family over the last few years.

Simon, like me, loves to cook and camp and loves a camp fire but found, time and time again, that camp fires were banned from many of his favourite campsites because of the damage they cause to the earth. It's understandable. He also found that portable barbecues tended to fall apart pretty quickly and often weren't up to the job. So he set out to create a portable hearth that wouldn't rust out easily, would keep the fire away from the ground, would provide a good heat for cooking and could also double as a camp fire.

The result is the Roadii Grill. It makes perfect sense to me as old wheels are great for cooking on and also make good hearths (I used to make fires in them on the beach in Wales). The Roadii is robust, easy to assemble and really enjoyable to cook on, simply because it is so easy to adjust the height of the grill to get more or less heat, or to stoke the fire. That's the clever bit of design that makes the Roadii really practical. It is also powder coated so it should last a few winters of being left outside (if you were too lazy to take it in). The stainless steel grill won't rust at all. Another feature that I really like is the ability to hang a dutch oven from the tripod, cowboy style. This means that stews and casseroles are still firmly on the menu for a winter camping trip.

I love it and have really enjoyed cooking on it over the last few weeks. In fact I am off camping right now and shall be cooking on it tonight.