Why I absolutely completely and utterly detest washing up 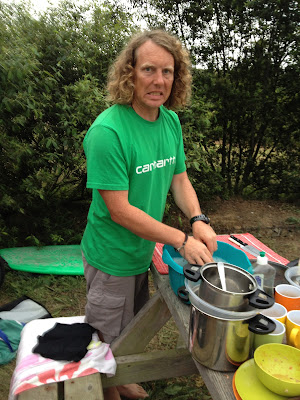 No one likes washing up. Or am I alone in thinking that? Maybe I am. But washing up is the dark side to cooking, and unless you eat off disposable plates every night, it's something we all have to go through at some time or other. And never more so than when camping. It's one of those awful realities.

Washing up on the campsite is harder than at home, especially if you are wild camping. There are no dishwashers out there in the countryside, only plastic bowls and dishcloths. Kettles must be boiled, bowls filled, tea towels sought, dryer-uppers cajoled. And woe betide anyone who uses all the pans when they cook tea. Especially when it's my  turn to rub a few miserable and begrudging suds into the melamine. Yup. I hate washing up.

I think this comes down to the fact that I once had a part time job in a professional kitchen. My job was to make fancy starters and plate up the puddings, then wash up all the pots pans, plates, knives and glasses afterwards. I think the technical term might be 'kitchen porter', which actually makes it sound like the job might involve nothing more than leaning on sack trolleys and smoking fags out by the back doors. That wouldn't be too bad. But no, the life of a kitchen porter is misery, even at an amateur level. It's arms in the sink, scraping other people's mess, listening to the chef's inane and foul-mouthed bollix and trying to stop yourself from walking out and never coming back.

The chefs I worked for were actually quite nice so I can only imagine what a truly damned existence it would be to provide smoking and trolley leaning services (as well as all the other awfulness) to some of those chefs who think it's a part of their job description to be a complete and utter tosser. The job is bad enough without having to deal with arseholes as well.

To top it off, the place I worked was the pub where all my school friends drank. The kitchen backed on to the pub garden so in the summer my happily drunken chums would be yards away, laughing and having fun whilst I sweated and swore from behind the steam and smoke of the kitchen. After they called time at the bar and my friends had left to get off with each other in the churchyard or at some debauched late night parties, I would still be there, wiping down surfaces, putting things away and cursing the chef for using so many pans it was unlikely that I'd ever get my rocks off. I did this every Friday and Saturday night for two years so if I sound bitter it's not without reason. I feel like I lost a part of my youth to washing up (and salute those who do it night after night after night).

It's hardly surprising then that my flatmates at college used to take pictures of me if they ever caught me with my hands in the sink. Actually they still do. The one above, in fact, was taken by my kids during our summer trip last year. It's no secret that I will do anything to get out of washing up. It got so bad when I shared a flat in London with my friend Andy that I was accused  by his girlfriend (falsely) of committing some kind of kitchen porter's hari kiri to avoid doing the washing up. I had cut myself so badly on a broken glass in the sink at the beginning of a mountain of unwashed plates that I ended up in A & E.

Annoyingly for all I am also a stickler for clean plates, having once been 'in the trade'. That drives everyone mad.

I'm not sure that hatred should really be the motivating force behind camper van cookery but that's the truth of it: many of the recipes in my books have been written with this guiding principle in mind. It may well be bitterness parading as helpfulness but at least it'll save you from the misery of wading through piles of washing up every time you cook from The Camper Van Cookbook or The Camper Van Coast. I don't want to be responsible for that.

Fortunately, with only two rings available, you'd have to work pretty hard to mess up a lot of pans cooking in a camper. Or would you?

Do you hate washing up too? Let everyone on the campsite (and in the kitchen) know with one of my 'campervan cook' aprons that tell it like it is. Check them out here.