Buying a camper this summer? Some things to think about.... 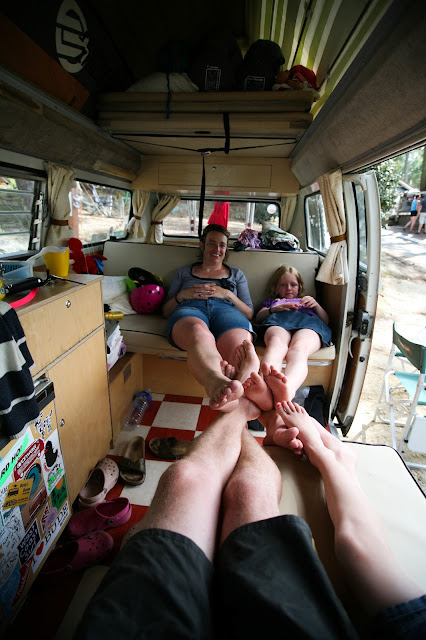 OK. So you’ve set your heart on getting a camper. That’s brilliant and we look forward to welcoming you to the club. But first you’ll need to work out what kind of camper will suit you and your family. I get asked quite a lot about this kind of thing so I thought I’d scribble down what I know. I hope it helps, but if I’ve missed anything, feel free to comment below…
The basic truth is that VW campers (and most other campers made out of standard sized vans) are small. They fit in a normal car parking space and aren’t even that wide. So the fact that they are campers is basically down to clever use of space. Conversion companies do great jobs of fitting it all in.
All conversions are different. So when buying a van it’s really important to think very carefully about what will work for you. I know this. Now that I am on to my fourth VW camper I know a little about what works for me.  What was perfect when I was young free and single would not be perfect for me now. There are other factors to consider other than storing my surfboards and wet wetsuits. So here’s a little summary to help you decide.
Don't forget that you can always home convert or get someone to convert a van for you. My friends at Individual Campers rebuilt mine using the original fridge and cooker.

How many are there of you?

This is a vital question. If there are just two of you then you’re laughing – pretty much anything will do. All you need is one bed, and whether that’s full width or not will be decided by how you feel about storage versus sleeping space. More of that later.
If there are more of you you’ll have to think about the numbers of seatbelts and the number of bed spaces available. Some vans have pop tops with hammock style bunks which will sleep children comfortably but are awful for adults (trust me I know), whilst others will have proper beds in their pop tops. These will be better for kids as they grow.
Toddlers, of course, can always sleep in hammocks that sling across the front seats. But for how long? Tiny tots have a nasty habit of growing up and won’t stay there forever.
If you are a family of more than four then sleeping is going to be even more of an issue. Pup tents are useful, as are awnings, but will always mean you’ll need to be on a site to sleep over. Laybys, wild spots, aires and Britstops might be off limits if you need to build to kip. The only ways around would be to sleep two in the top and one in a front seat hammock or go for a Viking roof conversion (available only on type 2 campers I believe) that sleeps up to four in the elevating roof.

It’s no good being able to sleep your extended family of fourteen if you can’t actually go anywhere. So seating for big families is as big an issue as sleeping. The law says you have to wear seatbelts IF THEY ARE FITTED, so if you see a van that has six seats and no seatbelts in the back you could feasibly allow your mates to sit in the back. But really? Would you? I wouldn’t.
Also, consider that there are often rear facing seats in campers. Unless fitted with seat belts by a manufacturer  the chances are that they will not be ‘travelling seats’. That means don’t use them. The basic rule? For goodness’ sake don’t be an idiot. Get a van that has enough seat belts for you all to travel safely. If it hasn’t, check that you can retro-fit them. Something to think about might be a day van that you can sleep in. You’ll get proper seats but much less storage space.

Something else to think about is "what happens if it rains?" And it surely will. So put the van into the dining position when you look at it and see if you'll all fit in. Now think about how that's going to feel after a couple of days away. Can you open the cupboards? Can you get to the cutlery drawer? Will you end up killing each other? You decide what's important.

Vans that have three quarter width beds (and cupboards down one side) do not, in general, have two three point seat belts in the back because access to the anchoring points is difficult. Many of them will have one three point and one lap belt.  Lap belts are okay if you are using a car seat with built-in five point harness for toddlers and babies but I don’t like the idea of my kids using them. That’s the main reason why we removed our old ¾ width bed and cupboards and replaced them with a full width bed – so we could have two proper seat belts in the back (see the picture above). The downside is much less storage space.

Do you like to stand up when you cook? Then you might need a pop top, even if you don’t need the upstairs bed space. Some vans have mini pop tops just for that reason. However, the thing about pop tops is that they have to be popped, whereas a high top is always there and can therefore be used for storage when it’s not being used for a bed. It means less moving things about at bed time. The only downside with a high top is that it might not fit in your garage. If you live in a high crime area or near the sea (where the risk of rust is so much greater) it’s a consideration. As for the tin tops, it’s fine if you don’t mind cooking sitting down or have no kids.

Bikes and boards and stuff

Here are some other things to think about

·         A Fiamma bike rack for a Type 2 (Bay) will only take 2 bikes, whereas the equivalent for a T25 will take 4.
·         Pop tops often mean you can’t have roof racks.
·         Buddy boxes are good for storing porta pottis in case you thought about going wild camping.
·         Swivel captain seats make more of your space. Found often in T25s but not so often in T2s, although the Berlin Westfalia conversion has them as standard (I think it’s that one). It is possible to get them fitted to the passenger side of a T2 if you take out the bulkhead.
·         If you intend to camp in winter a propex heater will keep you warm. But you’ll need to make sure it runs off propane as it will work in cold conditions when butane will not.

That’s all for now. More soon….