Pitch and be damned? Oooh. You cheeky camper. 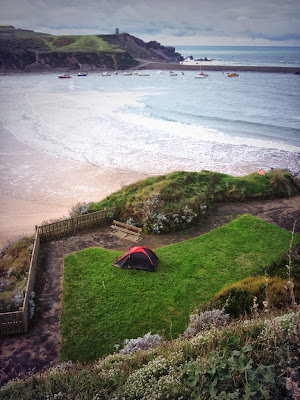 I went for a walk with the dog last week and came across the tent in the picture. I love the audacity of the pitch. It's right there, on the beach, with a pretty good view. They even had their own picnic bench. Looking on, I enjoyed the fact that they had the cheek to pitch up on council property, without permission (I can only assume) and were rewarded with that fabulous view. Slightly jealous, I imagined myself waking in that spot, watching the waves, brushing my teeth, greeting a shiny, brand new day as the sea breeze blew in my hair.

It was a nice thought.

Then I found myself thinking about who it was who had pitched, whether or not they had permission, who owned the land and whether or not they had pitched late at night to avoid being seen, challenged and thrown off the plot. I pondered the legal situation. I even questioned myself in thinking it was cheeky. Why? Because they were flouting the law?

Technically, they needed permission from the landowner, so, if it was not granted then the pitch was illegal. They had no right to be there. Then again, seeing as trespass is a civil offence, the only course of action for the authority would be to seek an order to remove you rather than arrest you, unless of course it was 'aggravated trespass', which is something else entirely. Mind you, if someone wanted you off their land they probably wouldn't come down with a wig and gown and present you with a order, would they? You'd be long gone by then anyway. But they could turn up and make enough 'noise' that you'd feel uncomfortable enough to pack up and go anyway.

If you had nowhere else to stay that night - perhaps because it was too late or the camp sites were full - you could even try claiming that being moved on would be a breach of your human rights. If you got the right bleeding heart you might just get away with it. Then again, what if the owner naturally assumed you were there to make trouble and mess the place up and wanted you off their land just because they'd had that kind of thing before? It happens. In fact I have been threatened by locals who 'don't like this sort of thing'. Is that not just ignorance? Or is it us (as campers)  being irresponsible historically? Do we become itinerant and undesirable and likely to have no respect for our surroundings just because we choose to travel this way?

I was going around in circles.

So I had to have a word with myself. I realised I have become obsessed. I write about wild camping and overnight parking in motorhomes and spout on about the freedoms of pitching wherever you like and bemoaning the fact that you can only do this in certain places, yet I have become restricted in my thinking by observing and playing by the rules. I have allowed the law to box me in - despite the fact that I wild camp a fair bit. Heck, I even drove to Scotland so I could wild camp without fear of reprisal. It's a long way to go just to wake up to a view when there are views like the one above less than a mile from my house.

So, how about this? What if nobody really cares if you pitch your tent on their land? What if the presence of a tent on our land made us smile because it meant that the land was being appreciated? What if the joy of pitching in the 'wild' overcame our fear of disapproval? What if we just didn't give a hoot about the law and what people might think of us? What if we became less obsessed with ownership and the law and more obsessed with being a little bit freer?

Wouldn't that be great?

It would. And I'd like to think that the people who pitched the tent in the picture above had a great night under the stars, that they woke up in the morning to perfect surf and that they enjoyed being free while they could. If they left it like it was before they got there, then good on them. Pitch and be damned.


(Disclaimer!!!! I do not condone law breaking.)