Flotsam and Jetsam and all that stuff... 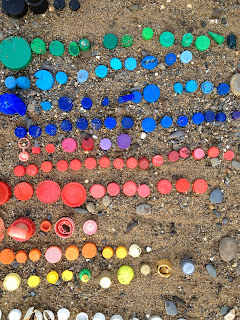 I am off to the beach to see what the high tides and recent storms have brought.

But before I head off I thought it might be interesting to brush up on my shipping law, just in case I find anything more interesting than cotton buds (washed down the loo - jetsam?), fishing nets (lost overboard - derelict?), bottles (thrown overboard - flotsam?) and bags of dog poo (one can only assume this is lagan).

Anyway, British law is quite clear about wrecks and salvage. Salvage is the act of saving something with the intention of returning it to its legal owner. Under the Merchant Shipping Act 1995, wreck material remains the property of the original owner and anyone who finds washed up goods must report it to a government official, the "Receiver of the Wreck", within 28 days. Failing to report such items could lead to a £2000 fine. The legal owner then has a year to come forward and prove ownership of the item. Legitimate salvors are entitled to a salvage award in recognition of their services. This would be a percentage of the market value to be negotiated between the owner and salvor. This means that the salvors of Branscombe (and other famous wrecks) are perfectly within the law as long as they reported their hauls and had intended to save the wrecked items for the owner.

Items that are classed according to the Merchant Shipping Act 1995 as ‘wreck’ are:

Flotsam: goods lost from a ship which has sunk or otherwise perished which are recoverable because they have floated.

Jetsam: goods cast overboard in order to lighten a vessel which is in danger of sinking, even if they ultimately perish.

Derelict: property which has been abandoned and deserted at sea by those who were in charge without any hope of recovering it. This includes vessels and cargo.

Lagan: goods cast overboard from a ship, which afterwards perish, buoyed so that they can be recovered later.

Finally, if you need a form for reporting anything interesting, HERE IT IS.