The illusion of freedom and the tyranny of teatime 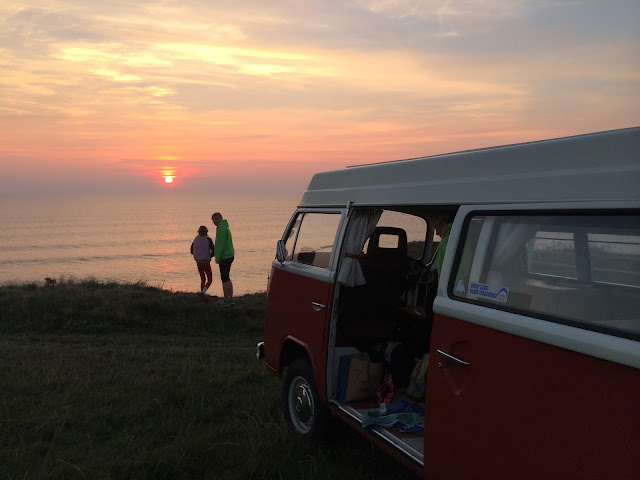 Here's a little tease. It's the final words from my new book, The Camper Van Bible. I finished the manuscript and delivered it in September after five months of constant writing, photographing, cooking and camping. It'll be the final tome in my 'camper van' trilogy and it is to be published by publishing giant Bloomsbury. It is due out late next spring. I am currently doing edits so I thought I'd share with you my final word.... apologies in advance for the expletive at the end. But it's well placed and makes the point perfectly. Do you remember when you were a little kid and you had to go to bed when it was still light outside? Or when you had to go home to have your tea at a certain time? If you didn’t you were in trouble. I still feel that now, when the kids have to be up for school or meals have to be taken at sensible times. I feel it in the winter too, when teatime turns into telly time and telly time turns into bedtime. Suddenly a wet and windy week has gone by and nothing has been done except for a few episodes of Mock the Week and 40 hours of life draining graft. I feel I am wasting away. That’s life sometimes.Everything stops for tea. But it shouldn’t. Teatime is a tyranny that holds us back and keeps us from enjoying the best part of the day. We wind down, hit the sofa and before we know it a large part of the day has passed by without the merest hint of an adventure. Often it’s the weather that keeps us indoors, but more often it’s ourselves. In northern Europe, where the seasons dictate our movements, it’s tough to enjoy an evening paseo, a meal under the stars or a promenade before the light fades, for most of the year. We hunker down and wait for summer.There is an internet story about camper vans that does the rounds from time to time in which it says that camper van drivers enjoy the illusion of freedom. Whenever I get it sent to me, again, for the hundredth time, I read it and think yes, it’s true, but only to a certain extent. We don’t have any more political or social freedom in a camper than in any other vehicle. We are still subject to rules and regulations, the laws of the land and our own – or our religion’s – moral compasses. We live within limits.But. And it’s a very big but. The camper van – and camping and outdoorsyness in general – gets us off the sofa and out of the house when others are watching soaps and gritty northern dramas while their life slowly drains away. When you are camping, teatime isn’t the end of the day. It’s the start of the evening. You live with the light, away from the tyranny of teatime. So when we talk about freedom we talk about simple things that mean we get to live a little more, if living is not being confined by TV, tea and bedtime. The freedoms camping brings might be small but they are very real to an awful lot of people, me included.This kind of freedom is bursting out of the house or office when you have finished your work on a Friday night, it’s the end to ‘school night’ restrictions at the beginning of the holidays and it’s the opening of a door to adventures, however small they might be. It’s the longest day, the smell of summer, the brilliant feeling of being physical, being out of breath, being giddy with excitement, of playing, of having fun.Do you remember that?I’ll take your lifetime in front of the box and raise you with one glorious night under the stars, staring into a fire, telling stories and laughing while the kids squawk and scream in the stream, and we all go home feeling grubby and a little bit naughty like we skipped teatime and, honestly, we really don’t give a fuck.Make the most of it. You only get one shot.