The Vango Air Hub: a weekend on a cliff top 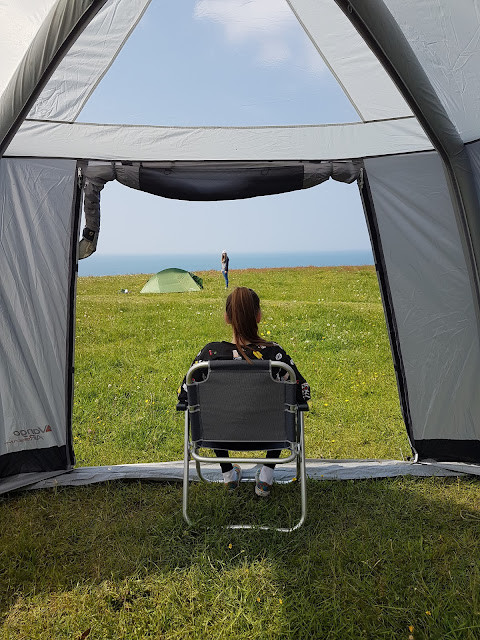 We’re off to Spain in a few weeks’ time. It’ll be the first time we’ve headed to Europe since our big 10 week tour of France and Spain in 2012. Our kids are that bit older and will be up for as much fun as they can get their hands on, while Jo and I are that bit older and wiser, but still want to have as much fun as possible. We’ve also got some new kit on board – and that includes our new VW T5 California beach and our Slidepod. So it’s all change with the Dorey camping machine.

We’ve also got a new Vango awning, an Air Hub, on loan for the trip, which we hope will complete our new set up.

The trouble with awnings 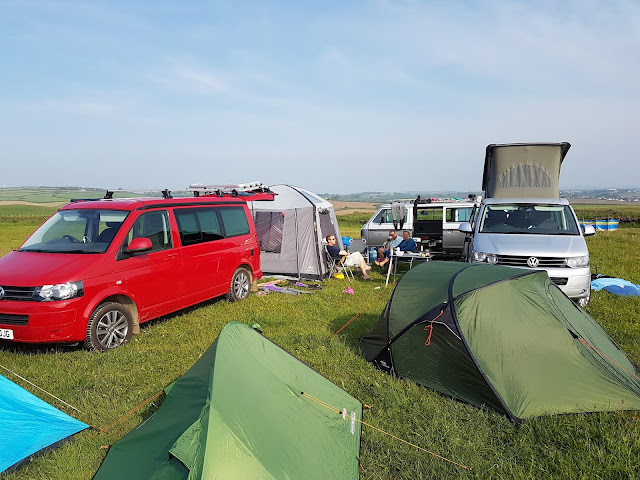 We’ve had awnings before, so we’re quite used to the way they work – or don’t. While they can add an extra room to your van they can also make it feel a little enclosed at times. When you attach the awning to the sliding door of the van it cuts off that lovely outside-in view that you get from the slider. In a hot location it feels counter-productive.
Awnings, we know, can also be bulky, heavy and a right royal pain in the behind. On our big adventure in 2012 we actually abandoned ours at a friend's house because we were camping wild some of the time and it spent more time under the van than attached to it. We also stayed in some places for just a night or two, making it impractical to put up and peg out an awning every other day. In the end, a lot of the time we used a pop-up pup tent to stash stuff we didn’t need.

The Slidepod kitchen (as you may well know) is a removable rear kitchen that pulls out from beneath the California’s multi board back parcel shelf. So you cook under the tailgate. It can also be removed, making it possible to set up a camp kitchen in an awning. There are a few freestanding tailgate awnings on the market and they come in at anywhere between £280 and £340. There are also a number of non-freestanding tailgate awnings – including those from VW and Just Kampers  – that hang off the tailgate, but for what we need it defeats the object. We need an awning for extra space when the van is in use.
So we looked at getting an event shelter… it seemed like a good compromise as it would provide a closable room that we could back the van up to and cook out of. We could even take the Slidepod out and turn the awning into a kitchen… so saving space in the van.
And, waddayaknow, I got approached by Vango a little while ago to see if I wanted to try out some of their new range of Airbeam awnings. I explained about our Slidepod and said that I’d seen the Hogan Hub at a show and considered it to be a good option. A few days later a Vango Air Hub arrived for us to try out with the van.

How easy is it to put up an Airbeam tent? 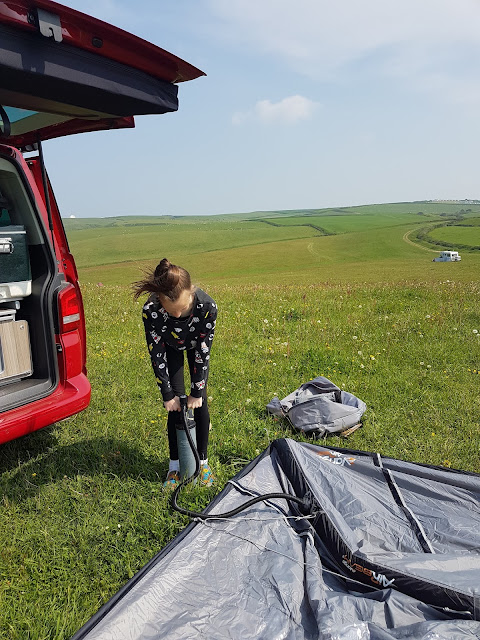 I’m a luddite by choice at times so I was keen to see how airbeam technology might compare to the traditional poles of a standard awning. Is it easier to put up? Is it robust enough to last a summer with the Doreys? Is it lightweight enough? Does it pack away easily? Will it work for what we want it to do? Can it cope with high winds?
Firstly, the Air Hub uses air to hold itself up. That’s right. Actual air. Okay, so I’m late to the airbeam party but it was a novelty to me to be able to pump up an awning. In fact, to show just how easy (or difficult) the Air Hub is to put up I set Charlie to work on the pump. We pegged the awning out, connected the pump to the single valve (it only has one) and then I left her to it. I can safely say that it took about a minute for her to pump up the Hub to a shape that roughly resembled a tent shape, with me adding the final few puffs to bring it up to pressure when she got 'tired' (bored). Handily for us the pump has a gauge to see the pressure and avoid over inflation. We then guyed it out, finished pegging the bottom and hey presto! One rigid hub that was up in about one tenth the time it would have taken me to put up our old awning. And with none of the ‘that goes there, that there, this pole goes here and that one there, then you hold it’ that it came with. You just peg and pump.

I have to say I was impressed. And it's got an RRP of just £260 so it's cheaper than most awnings.

I have to say I was a bit non-plussed by the Airbeam. I wanted to be anti airbean because it's sort of new and I know where I am with a pole. But I could immediately get why people love them so much. However I do worry about punctures and explosions  and going down in the night (well, you have to ask, don’t you?). But, much to my relief, the Air Hub stayed put for 24 hours, didn’t disappear off like a deflated balloon in the wind and didn’t puncture… so far so good.

Living with the hub

It was a natural thing for the action to focus on the Hub for our daytime activities. It provided shelter from wind and sun on a glorious weekend and then safe haven for boards and gadgets overnight. I chopped and cooked in it and it was great – just like an awning should be. So it did what we asked of it. 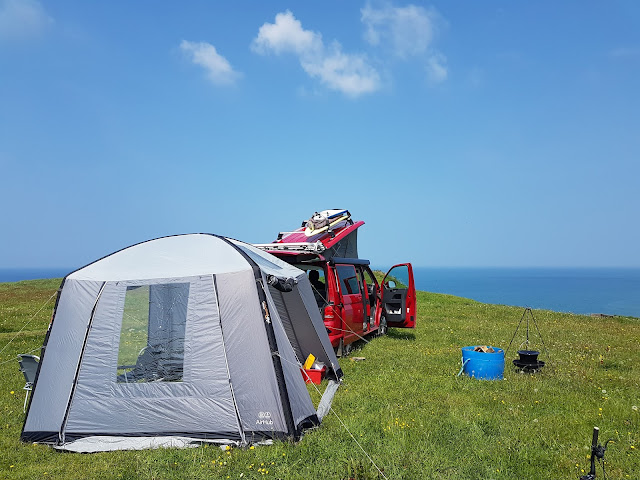 Letting the side down?

What about when it came to going home? How would that fare? The truth is that I wasn’t quite so keen on the way the airbeam dropped. It was easy enough, but not quite as easy as putting it up. The process was straight forward enough – you reverse the pump so it sucks and then pump away until the beams are empty. Then you wrap and roll as normal. Of course, as with all awnings we couldn’t get it to fold up smaller that it was when it arrived and this was partly because we couldn’t get all of the air out of the beams. A bit like deflating an airbed and not quite being able to squeeze out the last puffs. But at least it did go back in the bag. And that’s a start.

The proof of the pudding is in the long-term testing

So this was a fine weekend in May. “So what?”, you may ask, it’s hardly testing times. And you’d be right. Things can be very different under the sometimes trying conditions of a Euro camping adventure. And we shall soon find out when we hit the road in July. But until then, let’s give it some marks….

My new book comes out on 2nd June. Buy your copy now at martindorey.com