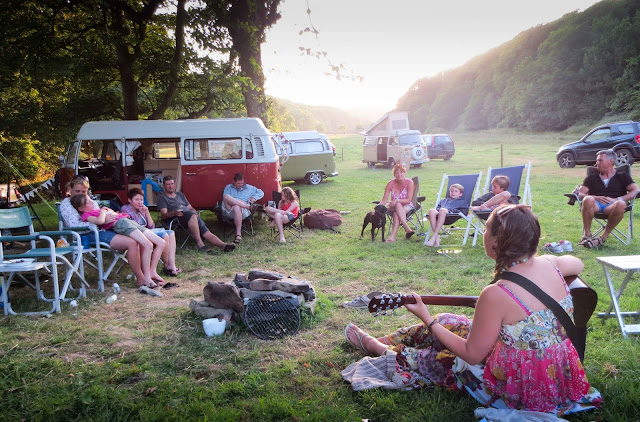 Good times? Camping? The open road? breaking down? A love affair? It was a simple question that I asked as many people as I could get hold of (including the good and great of the camper van scene as well as a few van owning 'slebs) when I was writing my new book 'The Camper Van Bible'. I wanted to find out what people thought of their vehicles and to look into the kind of relationships people have with them. I wondered if I'd get a load of hippy drippy stuff or something more pragmatic. In the end we got some sensible stuff but also some really emotional musings. Some people's connections with their vans run deep. Mostly though, the feeling was the same: camper vans make us feel free for a while. My favourite line, from Sarah Riley of Inspired Camping was this: "And just as we found we often had to fix it... it also ended up fixing us."

So let's hit the road. The quotes appear in full in The Camper Van Bible.

"When my daughter was a baby she was seriously ill with leukaemia. We spent six months by her side in hospital. During that period Jo and I hatched a plan to buy another camper and take off on a big adventure. We needed a dream to chase. It was the very best antidote to the horror of the childhood cancer we were facing every day and became, for us, a symbol of a hopeful future."

"I love the smiles Nan the Van generates as we drive through towns and villages, but best of all I love the sound of the solid 'clunk' as I slide the side door closed. It always marks the beginning of another adventure."

Josh Sutton, AKA The Guyrope Gourmet

"For me it’s not a lifestyle, it’s a machine, an organism as old as me and just as finicky, we’ve got some dents, we’ve got some rust, we need a new gearbox but remarkably we are both still puttering along."

"Custard carried us from the church on our wedding day and the precious cargo of our babies on their first camping trips.  I created a new career using the van as the focus for a column I write in a camping magazine. Custard remains the embodiment of happiness, freedom and family fun.  Just inhaling that familiar, evocative smell of my van every time I climb behind the wheel is enough to remind me what really matters in life."

"Put simply, my van is my escape. Escape from the world, escape from the set, escape from the executive producer who wants me to say it 'with more feeling'. But, most importantly it makes me feel like that 8 year old boy from Blackpool who used his duvet and mum’s dining chairs to make his den. Like most Vdubbers, I’m hooked."

"A camper van to me means freedom and impromptu adventures. It's more than just my daily transport, it's a realisation of my dreams. We often jump in our Danbury for unscheduled day trips to explore the great British countryside. If we like where we've ended up, we stay the night because we can. If we don't - we turn the key and move on..."

"We discovered motorhomes when we had twins. No airport stress, no being forced to follow someone else’s agenda and timetable and no need to spend the earth to have quality time as a family. Load up, drive, pitch-up, enjoy."

"Bernie was such a bargain! He was so unreliable every turn of the key felt like a step into the unknown. But that sense of adventure, the smell of the 80s upholstery and all the associated happy memories turned Bernie into a powerful time machine, somewhere I could hide with a guitar and be transported to wherever I chose."

Brian Briggs, the singer with Stornoway

"From the moment I was handed the keys for the 1974 Type 2 VW Campervan, I felt like the queen of the road. Winning Visit England's 'Fan in a Van' competition and being given the opportunity to explore our green and pleasant land in such an iconic vehicle was a dream come true."

Rachel Kershaw, the Fan in a Van for the Olympic torch tour 2012

"We bought our first VW Camper, a 1967 Canterbury Pitt, to travel overland to India via Iran and Afghanistan and back in 1976. We covered 30,000 trouble free miles on some of the worst “roads” imaginable yet only had one puncture! Though we had to sell her on returning to the UK, in 1978 we bought a 1966 Devon Camper; the family’s children cried as we drove off in her."

"As we were travelling back home ELO Mr Blue Skies came on the radio & the name was born, Mr Blue. Working for ourselves, being able to escape was always a challenge but once we had Mr Blue all we had to do was climb inside and as soon as we had turned out of the drive we felt like we were already on holiday. He is the ultimate escape, whether for fish & chips near our local beach, a day trip on the ferry to the Isle of Wight, winding round the lanes or a full touring and camping trip."

"Our camper became a place of recovery, a safe haven and an escape from difficult times. Our family took on the life of a tortoise: slowing things down, carrying our home wherever we went and allowing the squishy suspension to comfort and rock us to sleep. That camper may have been an old metal box on wheels, but it felt like so much more than that. And just as we found we often had to fix it... it also ended up fixing us."


You can buy The Camper Van Bible on Amazon or signed copies at martindorey.com