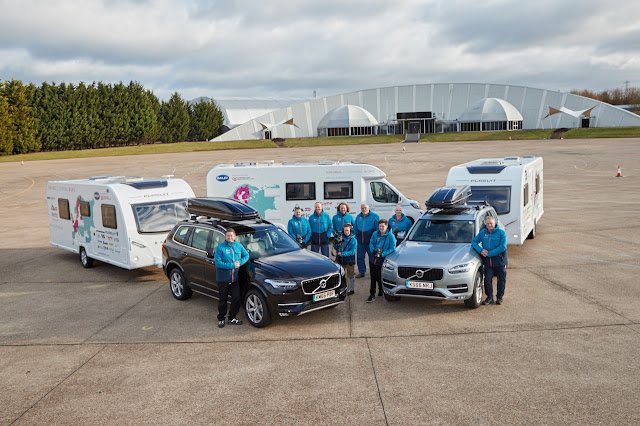 Ok. The Arctic Adventure got off to an early start at Milbrook vehicle testing station near Luton, arriving just after 8 to make the most of ‘quiet time’. The plan was for our little convoy of vehicles (a motorhome, two caravans and a campervan) to set off around 0930 after shooting some stills and video of the ‘big departure’. But, of course with cameras and action deciding the action we did a few takes until we just sort of set off for the motorway and the first few miles of the 5000 we have yet to do on this most marvellous of adventures.
We hit the M1, the M25 and then the M20  before cruising down the M20 to Ashford and the Chunnel. It probably took as long to load as it did to make the ‘crossing’ of the Channel to Calais. It seemed to be over very quickly.  But at least we could dive into the back and lounge around in the motorhome. You can’t do that in a caravan on the tunnel so we soon had a few wandering visitors looking for a comfy seat.
There are 10 of us on the trip. Bernie is my co pilot in the motorhome. Then there’s the film crew and photographer, Alan from the Caravan and Motorhome Club, then Simon and his team from Bailey and Lee, fellow motorhome design award judge and writer, plus John from the PR company. We are a varied lot, nine men and one woman, most of us over 40, many with lots of years of experience either making or camping in caravans and motorhomes.
I shall be cooking later in the trip when the press junket arrives and at desperate times, but tonight we ate out at the campsite restaurant, a Chinese. We are just outside Bruges, having driven a little over 200 miles from Milbrook. Might not seem like much but we’ve still been to 3 countries and crossed the Channel. Only 4800 to go until we get home in 15 days’ time.