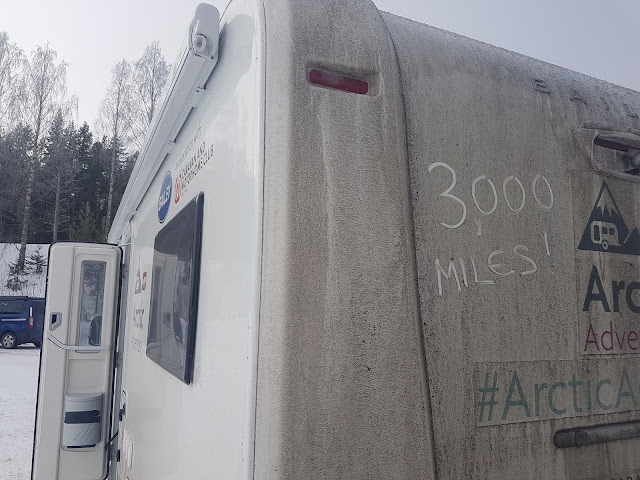 I had been in Sweden for a few hours when I enjoyed my first interaction with a Swedish person. I'll get to the point in a minute but need to tell you about how I got there first. My contact came on our first Swedish campsite, just across the border with Finland. The site was deep in snow, its glamping pods half buried in white, and the pitches cleared between deep drifts. We had arrived from Ivalo, having said a fond farewell to the film crew earlier in the day. Of course we would miss them - and their vegetarianism - but, on the plus side it meant that our group of hungry, carnivorous males could enjoy some meat. I promised them all a reindeer curry (ironically, honestly) once we arrived at our next overnight.

So that brought me to being in the kitchen block at the campsite, which just happened to be next to the sauna. Every campsite has a sauna. Did I neglect to mention that? Anyways, I was cooking the curry and needed to wash my hands so I went out into the changing rooms to do so. When I came out of the loo I almost bumped into a naked Swedish lady coming out of the sauna, presumably on her way to rolling about in the snow. I apologised in a very British way, as you do, and she said it was no problem before I dashed back to my curry. Why tell you this? I'm not one for stereotyping or for playing to them. But if you are going to have a cliche, you might as well make it one that celebrates life, fitness and a joy for living. Top marks Sweden! It certainly beats roast beef and umbrellas.

Okay, let's stop the sniggering and get on with the story. The curry was fabulous, a beef rogan josh with home made pittas, spinach and garlic, and rice. Bart, who had joined us in Ivalo for the return leg, fished out a guitar and sang us a few ditties while we drank beer and enjoyed a relaxing night in a snowy campsite, somewhere near the arctic circle. Perfect. 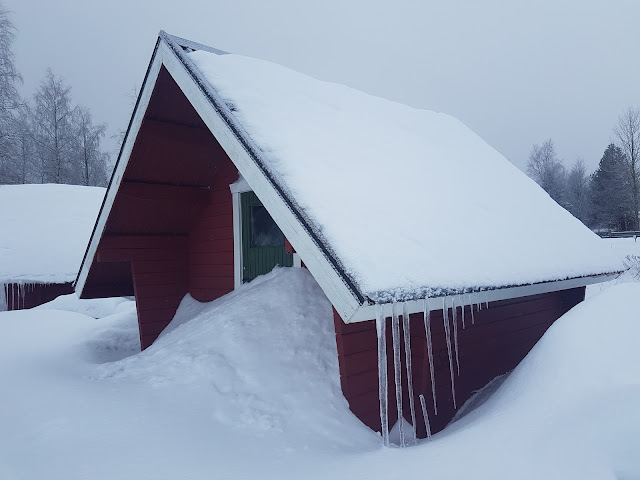 The morning brought more snow, perhaps unsurprisingly. It also brought a change of scenery. Instead of the long straight roads through snow and forests of pine and birch, we hit bridges, fjords, the coast. We crossed rivers and cruised around bends, past open farmland with painted wooden barns in typical Nordic colours: ochre, battleship blues and cool, burnt yellows. It was a blessed relief to be honest, although the pines and birch forests were still pretty much omnipresent between the items of interest. 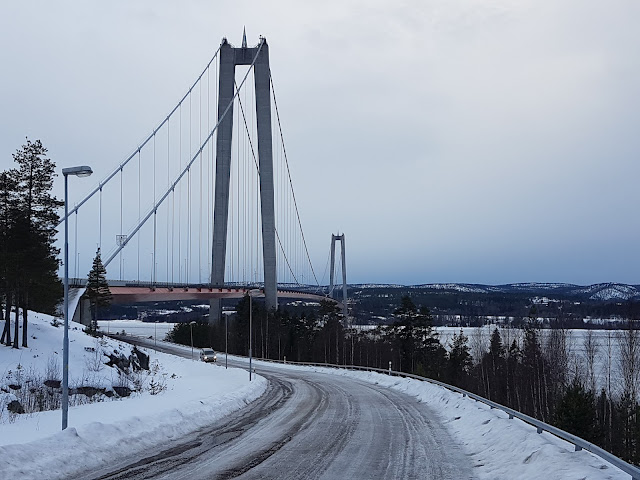 Our campsite on day 13 was in Sundsvall, a town on the Baltic coast about half way down Sweden's east coast. We arrived late, as usual, and then dashed into town for food before bunking down for the night. It wasn't until the next morning that we were able to appreciate the full beauty of the location. But that's for another day.